By applying in practice something that is mentioned or indirectly mentioned in this topic, you fully accept responsibility for the negative consequences of your activity.
You are engaged in overclocking solely at your own peril and risk.

FAQ
What is overclocking?

Overclocking is the ability to use the software to change the technical parameters of some hardware in order to improve their performance.

Overclockers are people who practice overclocking everything that has a clock frequency.

What can be overclocked in a laptop?

First of all, you can overclock the processor, video card (graphics chip and video memory) and RAM. It should be borne in mind that overclocking of one component indirectly affects or depends on others. For example, the processor is overclocked most often by increasing the clock speed of the system bus, which can also increase the frequency of the RAM and slots PCI, PCIE, AGP and others, but the devices in these slots (including the built-in ones) can this disconnect.

Does this threaten premature equipment failure?

If you overclock without thinking with your head, then yes. If you more or less understand the question, then the chance to wake up the laptop with morning coffee is much higher than to disable it with overclocking.

If I overclock my laptop, will it void my warranty?

If you go to the service later and tell me what youвЂ™ve overclocked, then yes. If not, then no.

And what if the laptop still burn?

But what if they steal it from you in a dark alley? And what if you slip and drop your laptop on the asphalt? Accidents happen, but this once again suggests that measures must be taken to avoid them. For example, do not walk at night through the doorways with a laptop in your hands and look at your feet. But seriously, just think with your head, do not chase a pair of free megahertz and provide sufficient cooling.

Why not overclock the equipment?

Equipment developers specifically give their products a certain safety margin, going beyond which there is a risk to bring them down, though the limits are often quite large, than overclockers and enjoy. In addition to physical frames it is worth remembering that during acceleration increases power consumption, which leads to an increase in temperature is accelerated by the device and the vicinity thereof, and the high temperature has a detrimental influence on the equipment. If the temperature inside a system unit can be easily enough to fight through a free space where you can install additional cooling system, inside the notebook overclocking freedom is severely limited, as a rule, the original stock of the cooling system.

How much, on average, do the components of a laptop get overclocked?

Processor no more than 20% of the nominal. The graphics chip is about the same, but if the chip is initially based as a game chip, then it is better not to touch it. RAM is better not to drive or drive at 5-10%. Video memory can be overclocked by 10-20%, provided that it does not climb from the operational one.

And what will give me such a slight acceleration?

First, feel like an overclocker. Secondly, get up to 5-25% increase in performance in games. Thirdly, youвЂ™ll warm your heart by the fact that your laptop is 5% to 25% faster than the exact same non-overclocked notebook from your friend.

Where can I get instructions for overclocking?

On the Internet, you can often find a variety of manuals, but not the fact that they apply to your particular situation. Rather the opposite. In fact, it is not, because instructions would have to be written for each individual device. There are general methods and software, but you will need to look for initial information about overclocking yourself.

I still don't know computers very well, can I overclock a laptop with your help?

For me, "not very good at computers" is this: I can fully and correctly assemble the system unit from components, reinstall the operating system, install drivers on all hardware and then reinstall the necessary software, but often there are problems with what I have never encountered before If for you "not very well versed in computers" means the same, then you can, but if not, then do not waste my and my time.

Do you know what part is in my laptop?

No, I do not know. If you are too lazy to use search engines, why should I or someone else do this for you? If you searched everywhere and found nothing, then why did you think that others would find it? Of course you can ask, but do not wait for an answer, especially soon. The clock frequency generator, by the way, can also be viewed here .

If you are about "try to overclock", then I strongly do not recommend you to overclock this model. ASUS C90S - reboiler. Rarely, what model on the move can dial 80'C per process, and the C90S can even at 90'C. Apparently, therefore, its developers gave the model such a clear name: wink_kind:

If you are about вЂњtry to brakeвЂќ, then it will not be particularly affected by its insides. As he worked an hour with a new fully charged battery, so will work an hour. Well, maybe 10 minutes longer.

Post has been editedDi'Brain - 18.02.08, 22:19
21.02.08, 00:18 | #11
●
NicolasGбµҐ
Friendssavagemessiahzine.com
Rep: (712)
In some cases, the laptop can not be overclocked, but even necessary.
For example, in my apparatus (ACER TravelMate 5520G-6A1G08Mi) memory at the nominal frequency of 1800 MHz processor clocked at 600 MHz DDR. When overclocking the bus 200 (800) to 222.5 (890) MHz, we not only causes the processor to operate at a "beautiful" in the frequency of 2 GHz, but also the memory now works at the nominal frequency of 667 MHz for her. I, however, did not stop there. Without raising the voltage on the core (and it is 65 nm to 31 W processor Athlon (Turion) X2 TK-55 is only 1,05V) processor also absolutely stably operates at 2100 MHz (234.5 (938) MHz frequency HyperTransport bus). Acceleration has successfully carried out as SetFSB, and ClockGen, only need to choose the right pll - ICS951416. With ClockGen I installed for my notebook standard frequency of 2100 MHz. Thus, Cool'n'Quiet technology remains fully operational so that the idle frequency of the processor is lowered to 938 MHz (instead of 800 MHz at the nominal frequency).
In addition, absolutely everyone (not just overclockers), I recommend to use a small and free utility RightMark CPU Clock Utility. She knows how to work successfully with virtually all processors from AMD and Intel last few generations, flexibly managing many parameters, such as energy-saving technologies. For example, on my Athlon X2 TK-55 you can control the CPU multiplier and voltage at its core. You can adjust the number of profiles, such as "Energy Saving", "Maximum Performance" and "performance on demand". The latter allows you to automatically and very flexibly control the speed of the processor depending on the degree of congestion. In addition, for each factor is allowed to choose their own electricity supply. I, for example, for the minimum factor 4.0 (wherein overclocking processor clocked at 938 MHz) is set voltage 0,8V. Some users claim that in their 800 MHz processor operates stably even with a voltage of 0,65V! As a result, the use of this tool allows you to kill several birds with one stone: to reduce power consumption and heat, extend battery life, reduce the noise of the computer.
Nor should we neglect to overclocking. I have such a Mobility Radeon HD 2600 (512 MB 2, the nominal frequencies in 3D-applications - 500MHz GPU / 400 (800 of DDR) MHz video memory). She, like the processor, thanks to its mobility is able to change the frequency in a variety of applications and disable inactive function blocks, but why would not it help? With this task will manage AMD GPU Clock Tool and ATITool. Personally, I use ATITool. At startup profile is automatically loaded with the frequencies of 110/297 (594) MHz (in the BIOS graphics for low load is prescribed such frequency mode). GPU temperature thus ranges from 33 to 38 degrees. When downloading any application or game of three-dimensional profile is loaded automatically with the frequencies of 625 MHz GPU / 450 (900 DDR) MHz video memory. For my copy such frequencies are absolutely stable. Some users are driven to the GPU and 650 MHz. On the temperature regime crackdown virtually no effect. During prolonged maximum load (in particular, about one hour Prime95 + "hairy cube" of ATITool) GPU heated to funny at present 55 degrees. Acceleration adds, and so not the slowest laptop fair bit of performance: results from the default settings for 3DMark05 - 7015 birds, 3DMark06 - 3730 birds.
In more detail, my and not only overclocking results and not only, sorry for the pun, are described inthis topic.
Owners of laptops from other manufacturers, built on a similar component base (AMD M690 chipset, dual-core Athlon / Turion processors) were reported on the positive results of overclocking by the method I described.

Post has been editedNicolasG - 21.02.08, 00:23
22.02.08, 22:23 | #12
●
Di'BrainбµҐ
Friendssavagemessiahzine.com
Rep: (116)
Many overclockers will need this little program to monitor the temperature of the processor. It does not require installation and is able to show the temperature of each core in the system tray, as well as keep a log (it is created in the program folder).

And there is a good program -Powerstrip. This software can overclock almost any video card, even the old one.

here is the prog
24.02.08, 02:45 | #15
●
NicolasGбµҐ
Friendssavagemessiahzine.com
Rep: (712)
Unfortunately, not every program copes with overclocking the Mobility Radeon HD 2600. PowerStrip cannot do this, RivaTuner does the same, although the latter works with the desktop version of the card. Personally, I have certain hopes for version 2.07, which comes out next week. As a minimum, it promises the full support of all Catalists to 8.2 inclusive.

By the way, the RightMark CPU Clock Utility recommended by me is also able to display the CPU temperature in the tray and keep a log. CoreTemp, however, may still be useful.
24.02.08, 05:54 | #16
●
iPryanikбµҐ
Honorary Gameday
Rep: (155)
speedFan can be used to monitor the temperature
24.02.08, 08:47 | #17
●
biboбµҐ
Friendssavagemessiahzine.com
Rep: (79)
and I have an old hp pavilion ze5600 .. I didnвЂ™t get new and without a Russian layout) 28% celeron in it, I didnвЂ™t find anything else. how to find out which graphics card? and how to overclock ..
01.03.08, 16:22 | #18
●
Di'BrainбµҐ
Friendssavagemessiahzine.com
Rep: (116)
1. downloadthis, find PCWizard there and find out the system's system (in particular, about your vidyuhi) with the help of this program
2. usethisand find the technical documentation for your laptop or any mention of the clock generator of its motherboard
3. choose in optionsthissoftware needed generator, increase the frequency of the probe to the maximum stable state (but not more than 20%) and lowering this value by 50-100 MHz, apply processor overclocking when loading
4. make sure that the temperature does not rise above ~ 70 degreesby this
5. herethisthe program can overclock the video card before the appearance of artifacts, and then you should lower the frequency a bit so that they disappear and apply the video card overclocking at boot time

Post has been editedDi'Brain - 03.03.08, 15:22
02.03.08, 14:00 | #19
●
Di'BrainбµҐ
Friendssavagemessiahzine.com
Rep: (116)
If you look closely, it becomes clear that the acceleration, as well as in everything else, there is a limit. Was processor with a frequency of 1600MHz, raised to 400MHz, the performance has increased significantly, and the peak temperature has not changed much. But here it is - greed of man is a desire to overclock the processor has at least 100MHz, resulting in virtually no performance also increasing your, but the temperature is significantly increased. Moral: do not always greater MHz znachet better. Do not be lazy to conduct more testing when overclocking! : Wink_kind: 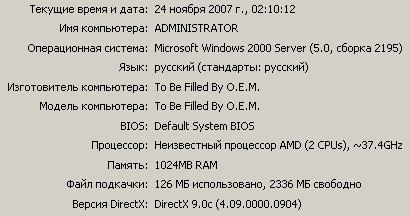 I attached a screenshot of the same, only completely. This is not a photoshop, and glitch-2K server with Windows service packs 1 and 2-core AMD processor (in fact, I have it 2400MGts). I made on a home desktop at the end of the year. Moreover, it is not only DXDIAG so buggy, and in general the whole system. Funny catching "of the Ponte" cheap performance test system that assessed theoretically, but what! :) But a better place to SiSoft Sandra treat - only she, being not "fortune-teller", told the whole truth.