Photo examples
Message # 1782 by empathy
Message number 1853, the author - = AsteriX = -
Post # 1948 by empathy
Message # 1947, by s8600
Message No. 1944, by Clapotron + Comparison with XS Max
Message в„–1941, author Clapotron
Message # 1939, by Clapotron + Comparison with XS Max
Post # 1936 by Gdenashi
Compare photos from cameras Sony A6000 vs Samsung S8 Exynos vs Samsung S10 Exynos
useful links
GCam for S10 on Exynos running HDR + on the main camera
Turn off the "soap" effect of the front camera
Comparison of cameras s10e and xiaomi redmi 4 prime.
How to upload files shot with a standard S10 camera in HEIC format
Attention! If you want to share your examples of photos, please do it throughGoogle driveorYandex.Disk.
There the photos are not compressed, they load faster and they are much more convenient to watch, Thank you!

Therefore entitled to ask for the quality

people about the quality of these have no idea, they just sprinkled its measure

I got into this subject, because my new s10e gave more noise under certain shooting conditions than the old s8

Try in addition to the type of the window something else pofotkat.

I did not guess, you have something else bets again, thank you cap

I say. person in the room with not enough lighting in the s10e in spots, and in 8-ki smoother picture. and that at the same granularity. Now I try to understand as well. or is the norm, and I have to be pleased with the evolution of

Clapotron,
A zasem look back? Let us remember that before all painted on the rocks. We live here and now, so everything is compared and analyzed what is here and now. And to compare accounts. On vacation in tae, I yuzal nout9 and his brother siphon xc. Photo on the laptop was much steeper in most cases, I am glad yuyl. But sailing, kayaking and taking photos I gave the phone "overheating, the camera will not work," and my brother took off on. Here it is already, for example, not in quality. There may be another case where a person will need the details, and someone needed a 10x zoom. So people compared. I do not take labor for 10 seconds to correct the sharpness and contrast of the pull, but I want to get the most of the phone, and click to get a good photo. Here come another way ... you glands in CAMCE good, right? So. they are technically better than the pixel, and siphon. Aperture is clearly higher than that of the pixel and Huawei. Next comes the work program part and the main question "why in this case the multi-billion dollar company so messy and can not outdo all competitors ?!". Sorry this is just a rhetorical question. I have a similar question Sams said "we are following the innovations and try dopilivat". Poor attempt. But overall, the picture quality is, of course, bombicheskie. And as they say, "if there is a BUT, all that went before him is not so important." I apologize for the errors and
03.05.19, 14:13 | #1887
●
empathyбµҐ
Friendssavagemessiahzine.com
Rep: (443)
oe777 @ 3.05.19, 14:07

person in the room with not enough lighting in the s10e in spots, and in 8-ki smoother picture. and that at the same granularity. Now I try to understand as well.

empathy
You seem to have lost the thread of conversation. About the balcony appeared another gentleman. Great photographer, not otherwise

And then then the photo from the balcony at all

here's a piece, both with HDR and good lighting. It is to make it clear that I mean 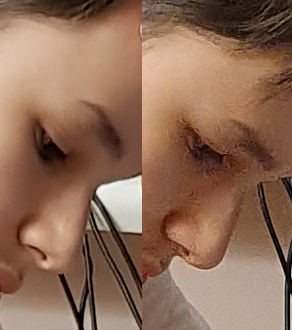 in general in the country yesterday with his son experimented a bit, do not claim to thoroughness and tried to make the most unbiased.
Made by two frames each scene each device (lens) for the test were selected best (the way at S10 the result was a stable, almost all of the frames were identical, unlike the S8 and A6000), nowhere focused tapom as device wanted and constructed frame, tuning cars
This testpushed this videoIn which the Canon 5D Mark III platted outright Huawei P30 Pro XS and the iPhone, as it turned out some truth in it there

lenses are rubbed before filming, the frames tried to choose the same
compare 1
source 1, Shirikov added for completeness
comparison 2 (SEL5018 fix compared with telefikom S10)
source 2, a photo with SELP1650 50mm added to complete the picture, but in view of the inferiority compared with only SEL5018
comparison 3
3 sources
compare 4
4 sources
comparison of 5
5 sources
compare 6
6 sources
Compare 7 portrait of the waist
Compare 8 portrait coarsely (at S8 Selective focus mode, S10 Alive focus)
9 Portrait of a close comparison, but the usual auto mode
Sources portraits do not spread from its own considerations

Fashin I can say:
1 extremely disappointed in bezzerkalke, at least with the whale lens SELP1650, and in due time otfotal her a lot of things (Sony Alpha NEX-5 was better: lol:
2 S8 still was not better than S10
3 photos from the S10 in my opinion look presentable and profitable for Instagram and your phone just do a fire screen, but if the zoom in / scribbled, then well, you know
4 Shirikov makes an interesting and bright images, but cropped it completely contraindicated, but it is definitely good and necessary
5 telephoto eat and eat, better than its nebylo, I rescued several times, but certainly not enough 2
6 in most cases the phone in your pocket is enough to cool the frame
7 hope the announced future update will bring the quality of night shots of field and add all the pictures, as well as reduce the same watercolor, uh, dreams ... :)

PS I know that the theme of the evening was not disclosed, is today and will do a comparison done without swing on the thoroughness, but have tried to take into account the main points

prompt on video Shirikov can write?


It is the birthplace of my s10e.
03.05.19, 20:25 | #1898
●
GdenashiбµҐ
Friendssavagemessiahzine.com
Rep: (3223)
For me personally, the mobile camera two things are important: color, dd. Details for the mobile photo a long time for the areas where these photos are used. If you really need something to pull out - I'll do equal and the picture that I need.

From the point of view of "Phone as a creative tool" better meyt20 about p30pro and yet know nothing. Three modules: Shirikov, sverhshirik, telephoto. Rav available from all three cameras. This is if you want to jump around these photos, something to squeeze out the maximum. Personally, I have to do this, simply have A7RIII and Mavic Air. But I can and from a mobile phone zhahnut, and could with a simple Chinese and Koreans from complex. People who understand what they want and know how - and sneakers will do what was needed.

The problem is that much clarity and detail no adds
it's small matrix. They increase the ISO starts making noise, but most users easy noble guise interferes with (well, woodpeckers!), And for this reason, manufacturers mercilessly crush the noise that kills part. Then on top of the noise throw Sharp turns and wild game. Those who shoot and look at the phone's display screen size (not really looking) like the result because the colors are bright, the objects are marked contour sharpness and everything is OK. Fans resent sprinkled, but not so much among the general mass of users.
03.05.19, 21:23 | #1900
●
ClapotronбµҐ
Friendssavagemessiahzine.com
Rep: (24)
Gdenashi @ 03.05.19, 20:33

Yes, no, the camera needs and children and the women, all. I'm talking about the whining only that here used to be better and so on.

Clapotron , I do not see any reason to complain, not at the point of being forced to use it. I do not like it - to change that much. Complexities of something.
I'm on all their devices from the signature fine shot and shoot. Can a man and a respect thing. Maybe we should focus on other things and not on complaints :) well, you need to understand the trends and demands of the masses, and what guided the manufacturer.
288 pages
« < 93 94 95 96 97 98 > »
Full version