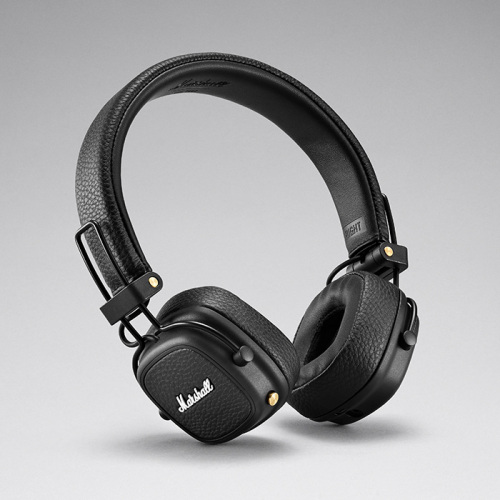 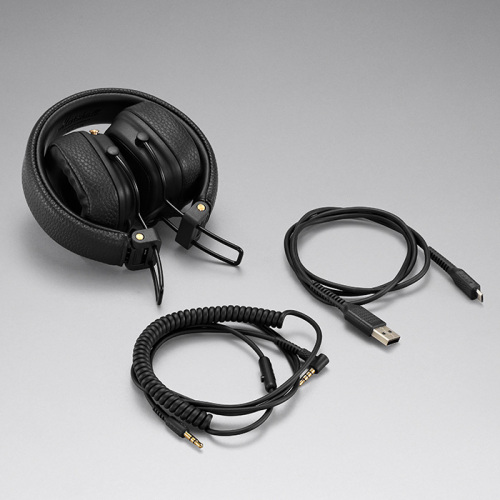 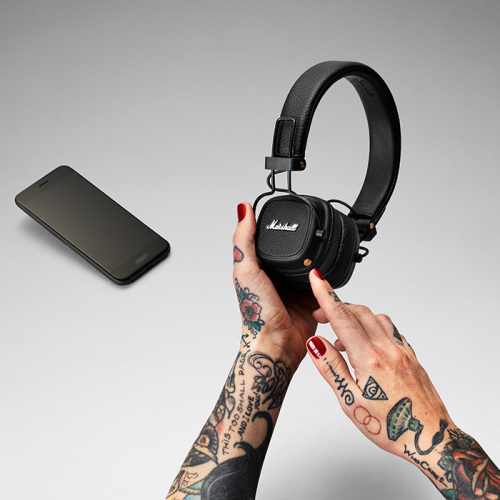 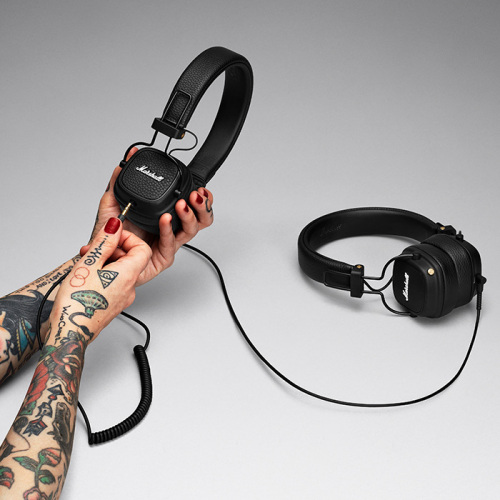 Description
Major III Bluetooth headphones open up a new chapter in the history of the revolutionary Marshall. This is a modern, based on classical motifs model has been upgraded in order to obtain a more elegant design, while maintaining a silhouette inherent in its original classical form.
Major III Bluetooth gives you the freedom and convenience of wireless technology with aptX codec and more than 30 hours of playback "on air" after charging the headphones.
This model, according to the traditional principles of design, has a well-proven durable vinyl covering, proudly bearing the legendary handwritten logo. Thus, all the details of the design are designed in the style of the firm Marshall.
Major III Bluetooth enhance the effectiveness of reproduction through the use of customizable 40-millimeter dynamic emitters, providing improved bass response, smoothing sounds of mid-range and crystal clear treble - listening to music with their help, you will always remember why these headphones are a true "sign quality "in this area of вЂ‹вЂ‹production.
Device characteristics
Frequency range 20 - 20,000 Hz
Impedance 32 Ohms
Sensitivity 97 dB
Diaphragm diameter 40 mm
microphone +
Types of connection wire (3.5 mm)
wireless (Bluetooth aptX)
Radius 10 m
Weight 178 g
Hours 30+ hours
charging time 3 hours

The goal: to connect to ps4, connect to a laptop and listening to music from iphone, preferably with Noise Canceling, well and good sound.
For these purposes, I would not recommend these headphones. I do not even know what to advise. Write to another topic, there may be an answer.
27.05.19, 14:58 | #6
●
WRCVбµҐ
Friendssavagemessiahzine.com
Rep: (4)
AnuarUr @ 05/27/19, 14:31

For these purposes, I would not recommend
Good
A more detailed, why not advised? Is the sound bad or just not kosher for such a price to connect to a laptop? : D
For example, I also look closely at them. I donвЂ™t listen to music in practice, but I think IвЂ™ll take it purely for connecting to a laptop and TV.

WRCV,
For such purposes, I would not recommend them for sure))) Well, firstly, these headphones are designed more on rock music, although you can listen to other genres, and secondly they present Aptx codec. For the iPhone, they just do not fit because they have their own codecs. To televisions and laptops that do not have the same support aptx no sense. You can take something and cheaper.

Post has been editedAnuarUr - 27.05.19, 19:19
30.05.19, 00:28 | #8
●
MoOnokбµҐ
Friendssavagemessiahzine.com
Rep: (26)
Use these headphones from July 2018 to April of this almost every day. Rarely charged.
I enjoy their quality in terms of materials and solidity. Choosing between different ears, and this seemed the most tidy, no creaking, no lyuftyaschimi.
Connects to all the gadgets have the ability to transmit sound on BT: smartphone player, laptop, TV, set-top box, receiver.
By the sound did not have any complaints.
I listen to different music, but the bulk of it is rock, metal, alternative. For this part they are right to the point. And dabble in other genres, and I do not understand people who write reviews on nuclear material that they have battened down the bass. What are the bass? They are not there in practice.
But, oh well, I did not quite like this.
In early April, there was a trouble: flew back fastening of the left earpiece, so to speak. In general, the left ear hung on the front mounting. Back insert can be, but it does not hold. Plus he cracked right in the middle of the loop, but it seems not really reflected in use.
Surrendered back to the shop (industrial park) to repair, returned the money, saying that can not be repaired.
Why am I all? I like their sound, look and feel (only of the case there is a bad thing).
But the problem with fastening deters me from re-purchase these ears.
It seems to say that in the third version they corrected the problems with the hinges, and eventually got out the problem with bindings own ears.
In the second version, the mount is not so, but looks more reliable. Why make a fuss?
Was anyone a similar problem?

P.S. I do not know whether there is a feature in the other ear, but for a night watching a movie with his wife, they are perfect. Connects to the system via Bluetooth the ears and to the ears by plugging wired headphones (via the audio in the ears) and bems! You are watching a movie, without disturbing anyone, without wires, adapters and splitters. The children were sleeping and we are happy)))
Littering of the sheet.

Tenebris Loner You may have got a fake. I'm in their clatter and hiss heard. Check through the cable, then it can all be gone. Well, and vice versa if earlier through the cable used.
11.06.19, 17:39 | #11
●
DgnazarбµҐ
Friendssavagemessiahzine.com
Rep: (3)
Pleasantly surprised with the function "rassharivaniya" music wire. Made a perfect case: According to wire the ears are connected to a laptop Brand yuzaetsya cable and the headset in the case of need (computer support). Via Bluetooth ears connected to the phone. The result: the music from your computer and phone is getting better with each other and can be on a background of a boring conversation that is put to listen to your phone. The main volume of not interrupt the interlocutor). Well, the back can be when talking on the Bluetooth connection, turn something on a laptop. Plus you can still go to all of the collective farm. After 3.5 mm razdvoitel connect to one input of the other ears in the third column in the well, and a laptop. The result: a column turn into a bluetooth, if necessary, you can move both the speakers and the ears.

v4stolorde If in Moscow, the drhead.ru
In the store you can listen to a lot of different.
By the way, in the course of someone why the price of these headphones so rapidly falling in price?

MoOnok,
I'm just here to Almaty and there are no such shops. Therefore thought mb someone knows from experience the difference

garrik101, Connect via Bluetooth to the PS4 does not happen (Sony does not like third-party headphones), and through the wire does not make sense.

Uharlay , Win 10, joined without any problems. Try searching for a driver on the computer itself bluetooth module.