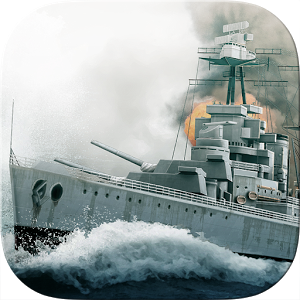 Description:
Atlantic Fleet is a turn-based tactical and strategic simulation of the Battle of the Atlantic during World War II.
Take command of surface ships, submarines as well as carrier and land based aircraft in a deadly struggle for control of the shipping lanes.
"Atlantic Fleet is probably the game of the year."
- Owen Faraday, pockettactics.com
*** 512MB RAM RECOMMENDED ***
Features:
- No In Apps / Advertising. No Pay-to-Progress. One Price = Full Game
- Stunning full 3D graphics and environments, including underwater
- Unique blend of deep strategic planning combined with quick tactical decisions
- Play as the Royal Navy and her allies or Kriegsmarine (German navy)
- Up to 10 versus 10 ships in combat
- 3 Game Modes:
1) Single Battle Editor with 30 Historical Missions for standalone combat
2) Campaign of 50 missions per faction
3) Full Dynamic Campaign from 1939 to 1945
- Individually saved games for each campaign and faction
- Multiplayer Hotseat for Single Battles
- Sink ships with realistic buoyancy physics, not with hit-point bars!
- Target specific ship subsystems to sink or cripple the enemy
- Destructible ships, subsystems and visual damage to ships
- 60 historical ship classes representing over 630 ships and submarines 350
- 13 playable aircraft
- Submarine warfare, wolf packs and convoys
- Carrier operations and land-based air strikes
- Too many more to list here, visit killerfishgames.com

webshark25, not doglyadel. Word mod saw a renown - no. The sense of fashion? The game is good friends with geymhakerom. I always have about a billion money.

Ships now fully capsize.
YAY, I knew this was a flaw.

DNK_Dmitry, Yeah, I just now looked at the last page of the manual, so there is no German names. Almost all Norwegian / Finnish, there is still a Pole wormed. It is possible that this dog and fumbled - still remember the occupiers, that's revenge as much as possible ...: D

While on the other hand, German surface fleet, and was not particularly strong - the basic rate they have been doing on submarines, and their right to nemeryannom list. But I tried the 50th mission to go with some submarines - Indian hut, physically torpedoes lacks all fill up, although in real life cash reserve torpedoes at three "nines" (66 pieces) for 4 battleships and 2 EM, taking into account the possible 30% - misses more than enough. So agree, really developed the Germans do not like ... :)

Hm ... I passed 50 missions of 3 stars with 3 submarines XXI. Torpedoes at all enough, tactics should be more simple, and does not always have to listen to what you say game - Aim of Chuikov. For example, I always corrective eye Elevation and fight 1 on 1 Bismarck / Nelson easy win. I give a broadside on the nose, turn off one gun from the second and third volley. Easy.

DrAuHgTkEg, ha, but in July, I wrote this update XXI-E has not yet happened. And with their 18-node complete scuba course, 6 torpedoes in a salvo, and fast recharging TA 50th bowl for 3 * and a fool overcome:. Rofl: You "devyatochkami" there, with "semorochkami" Try as I did. : P Gala underwater course of 8 nodes, maximum 4 torpedoes in a salvo and recharging 1 TA 3 stroke. On the results of unsubscribe, OK? ;)

DrAuHgTkEg, ha, but in July, I wrote this update XXI-E has not yet happened. And with their 18-node complete scuba course, 6 torpedoes in a salvo, and fast recharging TA 50th bowl for 3 * and a fool overcome:. Rofl: You "devyatochkami" there, with "semorochkami" Try as I did. : P Gala underwater course of 8 nodes, maximum 4 torpedoes in a salvo and recharging 1 TA 3 stroke. On the results of unsubscribe, OK? ;)

Yes, I tried (in truth, have tried before, but now engaged purposefully). Of course, in case of a miss - a complete ass, and not catch up, so I came as close as possible. Also, I said to myself with any submarines (and a pot), so that is what is necessary to direct to the eye. The Battle of the Atlantic made as follows: Purchases startuhoy 9-ki, and then after 1943 massively changed them by 21. surface fleet did not take at all. As a result, high efficiency (direct, hands), and low cost.
13.02.16, 21:30 | #374
●
PirvadunбµҐ
Active users
Rep: (0)
BotA pass for tea lovers. April 1940 destroyed almost 40 submarines, Gneisenau twins, two pickpocket, two of Leipzig, a few destroyers, forward of Bismarck, losing 8 destroyers and heavy cruiser Cumberland. bot run out someday submarine?
15.02.16, 16:36 | #375
●
SKV2014бµҐ
Curators
Rep: (130)

Pirvadun, Reale foshyzdy built 300-400 submarines a year, and the little list of available U-Bot-RH in the options available, and it is MUCH more ... 40. Takshta drown you, do not melt down. : D

PS. Comrades who are in contact with the developers to - if they have any plans other toys? And then I want to Choteau newcomer already ...

Post has been editedSKV2014 - 15.02.16, 16:39
16.02.16, 18:18 | #376
●
PirvadunбµҐ
Active users
Rep: (0)
MDA, mired my campaign, destroyers, destroying anything yushlyupki, blockades Kiel, get the hell out battleships, aircraft and boats presses enrage torpedoes, the battleship is not always lucky enough to dodge,
wanted Challenge, tried to save the Bismarck of the final battle (where Rodney Zhorik and Dorsetshire), unfortunately these lux here neubivaemye, and Bismarck MRET quickly, quickly cut down four of the Civil Code, albeit almost always miss, but always the engine cut down even if hit only 1-2 projectile. Maybe even here, not the fate take him out of this beating. It is fair to say, it remains afloat for long.

I wanted Challenge, Bismarck tried to save from the final battle (where Rodney and Dorsetshire Zhorik), unfortunately these lux neubivaemye here, and Bismarck MRET quickly, quickly cut down four of the Civil Code, albeit almost always miss,
I also like this level. I played twenty times, perhaps 3 or 4 times managed to drown ALL Bismarck, Bismarck himself truth and then perhaps that was fit for scrap - from 1 up to 2 GC remaining towers and little or no progress, that is, Scuttled in the state, at least to save the Heavy is not never worked. Now I try to Asilah number 26 (Battle of the North Cape), where Scharnhorst against Duke, 4 cruisers and 1 em, can not get of the Duke chvyaknut, rest all shoot in flow very quickly, with as Scharnhorst I is a 1 on 1 with Duke, it is in a relatively whole state, the whole of the Civil Code in the presence of stroke 25-26 knots, but does not leave a stone flower, however, the caliber Contrary full battleship too small-a ... Maximum, which failed to achieve - removal from Duke GC 6 barrels of 10, but the remaining 4-bedroom, he I urabatyvaet.

Those. in principle compelling missions in the game do not have, from the very words, this only until yesterday remained unclimbed. But the quality of aiming it at the playing of "Bismarck" to be almost flawless, because one or two mistakes (especially on hard settings, as I have) - and dry oars. And always need to start with "Rodney" as the most dangerous opponent. ;)

Ryabyat just started. Playing student's record but how to run aircraft catapult from ships
And the Germans are flying and I can not
Answer: no, katapultniki on the battleships and cruisers to attack other warships are not intended. If Battle takes place close to the England / USA (see. The card before the battle), ie within range of shore-based aircraft, the options have Air Strike button. If it is activated in the transition from movement to the shooting, the aircraft is available, if not, zvinyayte, attack the fact that there are ...
22 pages
« < 17 18 19 20 21 22 > »
Full version