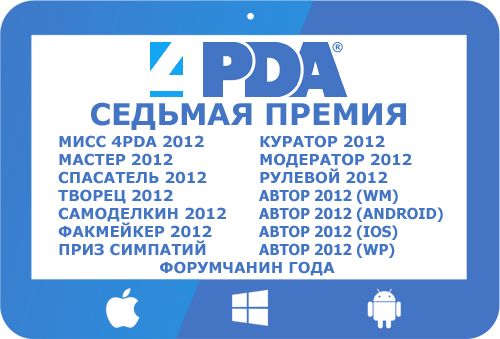 on the themes of the final stage of voting Navigator

Friends, we are pleased to announce the holding of the annual Seventh Prizesavagemessiahzine.com. The prize will be awarded according to the results of our active operations you. Award format - the user, as well as last year, but with the active participation of the moderators. They will simply help, use available functionality and moderator capabilities opportunity to award did not go beyond the Regulation. Approximate load distribution and powers 60% (Members): 40% (Moderated).

rules of conduct
1. It prohibits direct and indirect propaganda for some of the nominees, including himself.

3. To vote for a particular user can onlyonetime.

4. For each prize is only one person applies. With the same number of votes held another ballot involving only those nominees.
If found engaging in the violation of paragraph 1 and 2, we will be forced to exclude from participation in the award.

Stages of the Prize
(Highlighted in red the current stage)

Stage 1: nominations. Each user will be able to push on each nomination from one to three people, but only once in each category. Nomination of candidates for the nomination will be made within 7 days, with 11.08.2013 by 18.08.2013 .

Stage 2: Drawing up the list of nominees. Guided th 1 stage results in each category are selected by 20 users. If nominated by you, will be more, we will select 20 members, which put forward the first or more times. Creation of the voting round 1. (1-2 days)

Stage 4: Compilation of the list of winners circle 1 vote. In each category selected 3 leaders who go in the 2nd round of voting. Creating the voting 2 laps. (1-2 days)

Information on the prize

Curator of all topics relating to the current Premiums appointedKISLbIU

extended until the end of the 3 phases
Then why threads are closed? Or also at 0:00?

shoma_81, you can continue to vote. Votes not enough, so the results of the first phase is not zeroed, like in the rest of the categories.
All right, but if you have already voted at some of the topics, which extend the first stage for the second time do not have to: happy:
23.08.13, 09:11 | #59
●
BespectacledбµҐ
Honorary Gameday
Rep: (1965)
K
Dear users! We are forced to exclude from participation in the User Award DOC2008 due to the fact that it is fixed in relation to the fact of agitation to other resources ( link )
Screenshot