> savagemessiahzine.com >Other devices >Push-button telephones
24 pages
1 2 3 4 5 6 > »
Sim card cloning | How ? who tried?
26.05.13, 17:54 | #1
●
niketaбµҐ
Friendssavagemessiahzine.com
Rep: (1)
I recently wondered about the cloning of a sim card.
I have an iPhone as the main device, but recently there was a need for a dialer, which should be absolutely the same number. I need to resort to cloning. For a period of time, I will use one phone, but sometimes turn it off and turn on the second one.

What programmers and readers did you use?
About 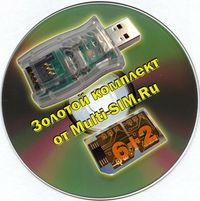 What problems may appear?

First of all: nowadays, except for Beeline, no one will be able to clone, unless of course the card you have is not a Megaphone of release until 2002, or MTS until 2010. TELE-2 has never been cloned.

Secondly: all the software for this is old, that is, the maximum for XP.

Thirdly: shove a sim adapter in a modern device - that is still a gimor.

Fourthly: when using a clone, gals may occur, such as voice distortion, incomprehensible freezes and loss of communication. True rarely.

In general, the thing is quite comfortable. I have four numbers in the LG GX500 dvuhsimnik;)

So I close this question.
I thought that you can make a completely identical SIM 1 in 1.

I thought that you can make a completely identical SIM 1 in 1.

It will be completely identical. And if you sew in such a multisyme,

then physically too. But we need the above conditions:

It will be completely identical.

On the forum (to which you gave the link) I will now see what and where to buy.
They will explain what's what. ;)

It seems that now all operators issue new usim cards and they cannot be cloned !!!
Lies. Today, "chpoknul" two fresh usima from beeline. One of them was micro. Surrendered somewhere in the 13-15 thousand appeals. As usual. ;)
31.08.13, 21:19 | #9
●
Insulin1бµҐ
Friendssavagemessiahzine.com
Rep: (229)
I understand that no one in Moscow will give turnout / passwords who can clone for me for denyuzhku? It also lifted the SIM card from the phone to the phone ... You can in a personal.
By the way, another question is, if someone agrees and still does it with me and for me, after my departure can I create a duplicate of SIM with this data for myself?

And where can I get this programmer?
Link in PM

It is not comfortable! It is necessary to pay 2 bills.

Shl. Found in Mitino. doing this for many years. Asking for all the pleasure of only 750 rubles.

Where can I get this programmer?