A lot of useful experience from the SXS users - miniFAQ

Sony Support Studio in Moscow - can be infinitely try new phone models in the
ALL ABOUT WHITEMAGIC в„ў - a detailed description of the macro photography screen + greening and yellow clipping at high brightness values
Sony WhiteMagic в„ў - LCD display technology improvements by adding additional monochrome (colorless) subpixels in the pixel. Due to this, it is achieved the significant brightness gain of the screen at the same luminance backlight LCD matrix, or vice versa, can be substantially reduced luminosity backlight LCD matrix (and thereby improve power consumption), while maintaining the same level of screen brightness as that of the conventional LCD matrices.
A detailed description of the technology - in English 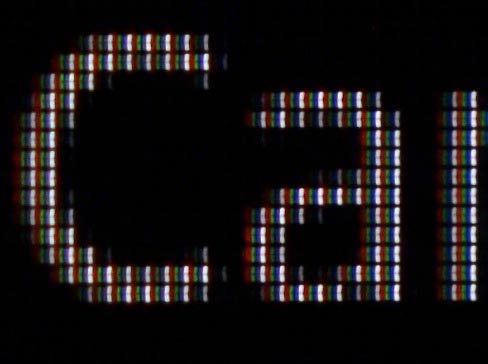 A side effect of Sony WhiteMagic в„ў technology - change the color of pure yellow(Yandex, Homer Simpson search box) in the direction of greenish and yellow shades clipping (loss of color gradations, yellow sunflower turns into a blur of yellow-green). It occurs only at very high values вЂ‹вЂ‹of the brightness of the screen (greater than ~ 70% on the manual slider, or a bright light source in the "bright" Auto Brightness). This phenomenon is the hardware and can not be solved by software. Screenshot showing software naturally normal display colors - screen shot needed by another device.

Any further discussion on this issue is not allowed!

USEFUL - HERE !!! Technical documentation, surveys, tests,
Check before buying a phone
TAPE OF NEWS - news, reviews, video reviews, testing
TECHNICAL DETAILS - detailed specifications, instructions, testing
ARCHIVE VOTING - Our Surveys
Are you satisfied with your SXP - ended June 30, 2012
Do you have any bugs to reconnect to the network firmware .162 - ended August 6 in connection with the release of a new stable firmware
Are you satisfied with your SXP - ended December 27, 2012

On the Sony Xperia P is attached to the plant all the transparent protective film! It is under the protection of the transport (that which is to be labeled with an eye for removal). high quality film, stable and transparent. Do not try to stick on top of the spare protective film or buy another one in the store!

The issue of greening yellow considered closed - see the appropriate spoiler above. Any further discussion of this issue is considered a flood and be removed without explanation!
Be mutually polite! ItвЂ™s customary at our forum to say "Thank you" by increasing reputation by clicking on the button

If you have less than 15 messages, click on the button.

in a useful message for you (on the left below, avatars and reputations) and tell us what to put "+".

There is no curator in the subject. For questions about filling caps, please contact the section moderators via the "Complaint" button under the messages to which you want to add links.
If there is a user in the subject who wants to become a Curator and the correspondingRequirements for candidates, he can apply in the topicI want to be curator(after having studied the topic header and all materials for curators).

Late notice that the menu bar button is highlighted weak. If the "Back" - well, the "house" - a barely noticeably worse and it is not certain that the "menu" it seemed to me burns in the floor strength. A friend who is usually on things like not paying attention, said that - yes, he, too, it seems that the weaker. I know that warned, but the store that did not pay attention.
The cap, if backlash is barely noticeable and only when rocking back and forth. Left and right - is sitting tight. During operation, it is not noticeable, not a drop.
Top plastic is fitted a little bit not sure. Shifted toward the =>On the one hand there is no gap, on the other hand it is noticeable. But a small, do not currently represent a huge gulf. So, carping.
During the assembly put 4.
Calls to order. I can hear perfectly, and I can hear very well. In the settings selected 2r / 3a
Display, as saying. At maximum fade, but without comparison is difficult to say the yellow or green, but also say that it is a purely yellow - it is impossible. On the machine almost everything right. If desired, sometimes, to yellow can find fault.
Someone wrote like that there is no focus on the screen is touched. It is configured to work well. Yes, start the camera from sleep goes 4 seconds.
The speaker is not appreciated, t. To. It was noisy. IMHO, the subway it will not be easy to hear.
Senhiser'y 300 in it shout well.
FTC, another fly in the ointment. The box says it's a "special equipment", all as people express charge, 2 NSF and so on. E., But the headset 650 and not 750.

I am sure that something important and interesting for you forgot. Then may I will add something. Or if you ask.


Just do not understand, in different settings, such as screen background is not pure black, but with a touch of birryuzovym. It looks ugly. As if to be black, and from under him trying to "get out" other colors. I thought purely a display problem, but made on a computer screen and also clearly shows that there is not a pure black. This is because they have tried to make krisivo what? On the phone it looks worse, IMHO:

The issue is still there. I tried all the live wallpaper by turns and, as I understand it, after one has received in an area below the menu button "cloud" turquoise. Initially, like he was not there. How to remove, no one knows?

I just watched the branch S-ki + in her hands for a while. I formed an opinion about it. I want to know the + and - between them.
if you please:
for me turned out to be too big S, P in size is more comfortable.
control touch buttons - the S intuitively want to press the strip (if you can use a long time, it's like)
In S screen in the room when you change the viewing angle slightly, but loses color (fade) P - No.
tactile sensations from the metal hull of P ... more qualitative chtoli ... not sure how to express zanyu
Set living wallpaper P more than the S - one living forest is worth :)
configuration - in P is an additional protective film and a headset qualitatively
I almost forgot a very significant advantage of P - power button located on the side rather than the top, Commission, and the smartphone is much more convenient than the S

in all other S-ka feel better display resolution, battery, memory, CPU cycles (by the way actually does a better job with video) camera, all the connectors are plugged in contrast to R.

also highlighted menu button is weaker
One idea is that they are equally illuminated, but because of the fact that the menu is drawing more than one piece, ie. E. More shaded (so to speak) because of this and it seems that it is highlighted worse. We must all ask. If someone has highlighted all the same, it is a problem for us.
Just if you bend the phone and try to look in the direction of the diodes, a kind of all the same burn brightly.
11.05.12, 23:01 | #926
●
A_VegasбµҐ
Friendssavagemessiahzine.com
Rep: (346)
Egoist @ 11-05-2012, 22:43

TtN wrote today saw aparata light there was the same but did not like that the speaker voice cracking, poshol another maazin there was light curve and kakayato dull speaker and also popped. March with the voice speaker trouble at full volume begins to crack. Most likely that there were no complaints daneyshey prishivke volume diminished. So from pakupki had to unsubscribe.
I not noticed cod in the earpiece. I unscrewed the volume to maximum

Just do not understand, in different settings, such as screen background is not pure black, but with a touch of birryuzovym. It looks ugly. As if to be black, and from under him trying to "get out" other colors. I thought purely a display problem, but made on a computer screen and also clearly shows that there is not a pure black. This is because they have tried to make krisivo what? On the phone it looks worse, IMHO:

The issue is still there. I tried all the live wallpaper by turns and, as I understand it, after one has received in an area below the menu button "cloud" turquoise. Initially, like he was not there. How to remove, no one knows?
Egoist When you install the theme Silk everything is lost, so I at least.

Egoist, Silk threads when installing all of this disappears, so I at least.
It is well worth it. Somehow, everything remains the clouds. You also do not have clouds around the "menu" button, as I have in the screenshot?

You also do not have clouds around the "menu" button, as I have in the screenshot?
It is, but it is the same color as the wave - gray.

2. Is it possible to program the phone so that the phone at the approach to the NFS-tag yourself included the distribution of Wi-Fi (mobile APW)?
I think yes, all actions that can be programmed:

3. With the departure of the phone with NFS-action tag zone, it goes to a certain "standard" state?
No action only occurs when you touch a specific label. A phone with a range of departure NFC-tag band happens when the distance from the mark by more than 10-20 cm.
-----
+ Phone reads transport subway card)))

and tweet like Sony responded that there is no such possibility.
And even earlier, and it has been discussed many times / mentioned - in the Sony YuEsBi host - is.

A camera is suddenly the best of all Sonkovskih. Very unexpected, but cool.
By the way, I have the same feeling! But not much thoughtfully looked at photographs ... Can we just make myself already that our machine? ;)

And the request to all! If you write about a deaf earpiece, specify the mode in which you network: GSM only or GSM-3G

The review has a photo with a flash drive connected via an adapter, and a tweet like Sony responded that there is no such possibility.
I confirm that such an opportunity!
Himself yesterday so stick with external watched Doctor House!
The only restriction: the flash drive must be fat32, ntfs can be look after
how our unit root fasten!
12.05.12, 06:17 | #941
●
VelosifedбµҐ
Friendssavagemessiahzine.com
Rep: (21)
Beastorizer @ 12.05.2012, 05:12

It remains to know how could so contrive and talk without covering it with his hand
It is strange, but when I hold your phone to your ear, the lower part of the cover is not very easy, I even understand that usually it always talking.
Right hand - the thumb at the bottom - the volume rocker, the index rests on the back cover, and the rest - on the top edge. At the same time they do not grip the tube and keep it with your fingertips. Strong grip.