Where can one buyoriginal battery ? Shops, trading floors, etc. Answer

Accessories - reviews, articles, tests, purchase, etc.
Part Number of Original Samsung Accessories
Spigen SGP- Great accessories, covers, films, etc.
Spigen (SGP) Cases Overview
Selection of accessories
XDA Battery Review
Accessories Overview fromresetkin - Recall 1 Recall 2
Youtube channel with reviews of accessories
Why aren't all the charges equally useful! + Features of the work of our memory from st.v
+ If Your Charger Slowly Charges The Galaxy S3 - Finalize! from zedt
Which charger to choose? Which one is suitable? Which is better? And then my charge is slow! + About charging issues
Accessories can be purchased at the following resources:
Ebay
Aliexpress
SPIGEN in Russia + still
Pocketgear
Pdair
Clove
Handtec
Computeruniverse

Original battery on 3000mah and suitable covers
Genuine Samsung EB-K1G6UBUGSTD Blue 3000mAH Extended Battery - Galaxy S3 i9300
Photo of the device with a 3000mah battery
Tire cover
Overlay Iluv Gelato iSS259BLK
Case liner
The device with a 3000 mah battery and a new cover in the case of ZooGue Social Case -Video
Three more covers for extended battery
Overlay belkin
The method of cutting the opening in the lid and dressing any cover + another method
Cut out the opening for the battery in the lid. Instructions + sizes.
Diztronic TPU Case - pad for the device with a 3000mAh battery
Original 3000 Lifetime

M
There is no curator in the subject. For questions about filling the caps, please contact the section moderators via the button 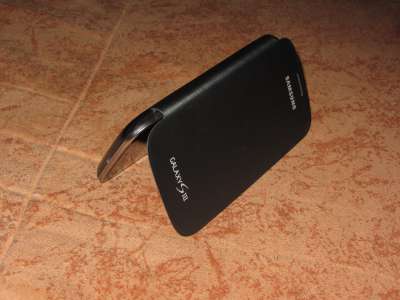 mikroyusb-hdmi that it provides and whether you can play the game by controlling your phone and look at the telly
It provides video output to the TV screen ( "mirroring"). Play as possible, I tried, but there is some lag. And it is not very convenient that the phone is "hanging" on the wire. In this sense, much more convenient-Miracast dongle, the same AllShare Cast Dongle from Samsung (there is a cap), but it is quite expensive.
07.12.13, 21:06 | #6964
●
Black_masterбµҐ
Friendssavagemessiahzine.com
Rep: (0)
People, tell me what colors cover SGP Neo Hybrid will be perfect for black SGS III (photo / video please)? And if he slips in his hand as compared to the phone without a cover?
with me +++

gengrenka, thank you for your review. Very helpful!
geka1973, and my photo: D
09.12.13, 18:13 | #6966
●
Tujh2бµҐ
Friendssavagemessiahzine.com
Rep: (5)
A few weeks went with razdolbany cover repairers offered back cover for 1200 rubles (although there and $ 100 there, just plastmasska) and Chinese for 350 rubles, they said that the Chinese to the original will not work, so I did not take over the mower in end Chinese ideally suited to my SIII, so it will be careful: happy: Even though they said that will not work, and it was better than the original, like the money for me to play!
09.12.13, 19:59 | #6967
●
SubXaNбµҐ
Friendssavagemessiahzine.com
Rep: (7)
Rejoice, My children! : D

A few days ago came to mybattery7000 mah (actually on tests of about 6500). I waited for him exactly one month. All about everything has given 2600 horror))) But it was worth it. Usually, my phone almost in the hands of the discharges, and the BOAR so powerful that for 3 days slipped by only 63%. For newer phones, especially on Android - it's just a gold mine.

And yes, someone suddenly needed. I test a bunch of firmware versions and cores. And in the end I settled on firmware 4.1.2 (to Ruth), and most importantly, the kernel "Boeffla-Kernel". And if you're not actively using it (games / max brightness / wi-fi), then it will last 8-9 days quietly !!! Checked. Per night is not discharged at all. And I do not know why, but when using the "Power Saving" zhrotsya charge faster.

Developed and tried to make a stylish and very comfortable bag. Particularly well kept in hand (albeit in sweaty: D). And what about the size. I do not know about you, but I like big phones that have at least some weight, but not the new Smart, who is now out.
In short, the phone will be like a hamburger of two S3. I'll have to get used to)

Verdict: take it, do not regret it)

Post has been editedTerapohit - 11.12.13, 18:37
11.12.13, 23:10 | #6973
●
zedtбµҐ
Curators
Rep: (469)
DU DU ... Well, what cluck! :)
Issues with charging closed and understood as a clear day! A rare case with a phone problem - the controller power, then repair.
The rest: 5V 1A, high-quality cable, especially if it is removable. And if you do not buy a home, and certainly not for the Samsung. Then there is need or vidzhitom see whether the phone will perceive it as a powerful memory, or stupidly tseshka to check whether, for the date of Samsung closed it necessarily , Otherwise it will not take 1A, but only 500mA.
ps it's all there in the hat!

Advise normal charging.
I do not know where you buy it and did not look at the original price. But in any case, at least for ebee, even in the shops of the city, just buy it to Samsung. And the better the original. You could even where those versions 0.7 amps and a removable cord. Proven with them everything is OK.

Advise normal charging
recently I bought his wifehttp://www.ulmart.ru/goods/346591oddly enough my identity beautifully charges: good: I was pleasantly surprised: rolleyes:
13.12.13, 15:44 | #6975
●
malinin194бµҐ
Friendssavagemessiahzine.com
Rep: (10)
Has anyone bought a joystick on a smart, JOYST the HOME? How to install it? W does not see it?


Post has been editedzedt - 13.12.13, 22:04
13.12.13, 18:02 | #6976
●
Pie2012бµҐ
Friendssavagemessiahzine.com
Rep: (1229)
Review about: Transparent Case for $ 0.99
Hello everyone! It was my first purchase on ebay, cover. Roughly speaking, it is screening to see how the whole process. But I liked the cover.
He is almost completely covers the corners, and even part of the screen, in that you can lay down your phone screen down. On a gray smartphone clear case looks pretty good. General impressions going on 9/10 (he almost pokotsali .. but it's not a problem).
And now about the seller - I certainly do not know ... but it's very good! Immediately I left on my wall, and a review was due. The average response took 1 day, but not a problem for me was. Very sociable and friendly.
In short, the first purchase was excellent. Now I am waiting for resale stylus 10x: D
P.S. And for iPhone bought, selling: D

Photos are attached:
A photo


K
Added to the header